Since my birthday last year, we've been experimenting with some ice cream recipes in my new ice cream maker. The best so far has been a vanilla extract heavy peanut butter ice cream with chocolate chunks. I kept thinking that I was dreaming when I ate it. Kudos to the hubs, because he was the one who made that delicious batch!

Most recently, we decided to branch out and try a gelato. I got myself confused with a "stracciatella" description I found online, thinking that this ice cream was going to be made from the interior amazing goodness of burrata mozzarella. (Perhaps something we'll still experiment in the future. Doesn't that just sound like heaven from the freezer?!?)

The actual Stracciatella Gelato recipe that we found indeed only called for milk and cream (no mozz), but we wanted to try something different. So we put together all of the ingredients and came to find ourselves short two cups of whole milk. So we substituted with coconut milk. And honestly, it turned out really tasty! It was very coconut forward though. It basically ended up being coconut ice cream with chocolate chunks, but we weren't mad about that!!

Next time, we'll try to have all the correct ingredients, so we can taste what a stracciatella is supposed to taste like... but in the meantime, we may have discovered a very happy accident! 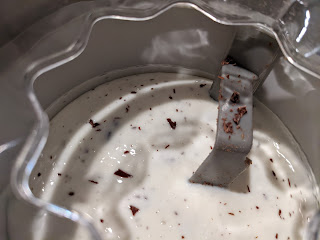 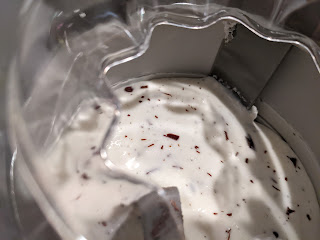 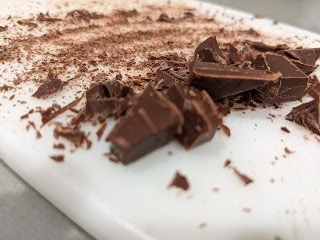 We have been settled down in California now for almost six years. I moved out here for a new job in July of 2016, and although we've lived in three different places since then, it has been a long stay for us! Before California, we were in Colorado for four years and Texas for only two years. Being fairly nomadic since we've left Ohio in 2010, it feels both nice and yet also strange to be in one place for so long. 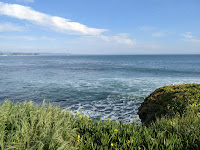 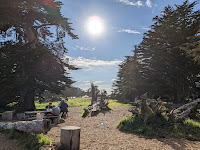 California is expensive. We have enjoyed some amazing life and career milestones out here, but we are starting to wonder if this continues to be the right spot for us. Not only are we looking at our budget and how it could benefit from a more cost-effective location. We are also longing for safer cycling roads, kinder people and we miss our friends. Santa Cruz was named the most dangerous county in California for cyclists and pedestrians this year, and with cycling being one of our daily activities, we're just not sure how much longer we can dodge an accident. The drivers are just downright mean, and not just to cyclists and pedestrians. The road rage toward other cars can be scary out here. I just don't understand what makes people want to tailgate and yell at you from their car on a Friday afternoon at 2pm in a beach town?! Like - chill out. We're at the ocean! It's beautiful. Take a breath.
Consistently though, every time we start this discussion, we take a drink out to our front patio to chat. The sun is shining and the weather is warm, even in the winter. All of our tropical garden plants and succulents look gorgeous, blooming pink and green. It will be extremely difficult to decide to move away from this weather. It's like nothing else we've ever experienced, and going back to any place with snow and rain will be a bit of a a shock. 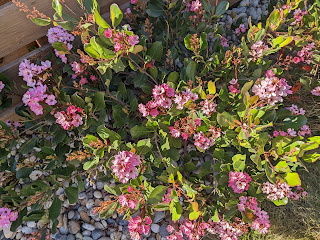 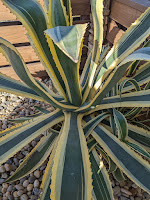 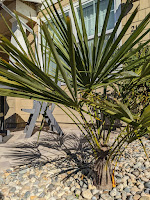 But what is better? Deal with some snow and rain in the winter so that you can better afford your life and feel safe, secure and "home" again? Or continue to live in this gorgeous place where we struggle a bit? Does the weather contribute enough to make it worth staying? I actually believe it's the only thing keeping us happy with our situation at all...
And so, it begins again.
More to come soon.
Posted by Rach at 8:26 AM No comments:

Doing a little reminiscing of our time in the City of Love in 2019. Celebrating the hubs for being my support system, my best friend and for helping our love to grow bigger every single day. I'm one lucky girl, that's for sure. 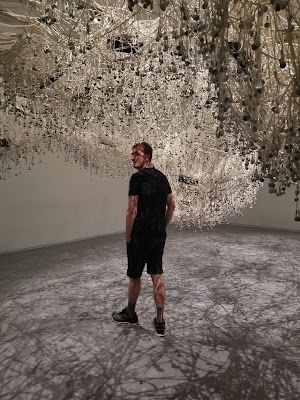 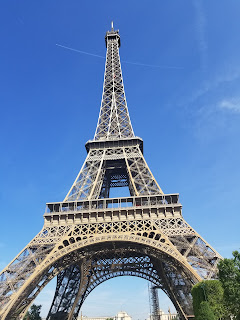 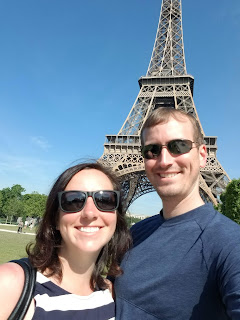 We have been working to make the perfect homemade pizzas in our house for a long time now. I've bought several cook books from renowned pizza makers throughout the world. We watch documentaries on making pizza and read anything we can to gain more tips and tricks on improving our recipe. We've struggled with sticky doughs, tough doughs, doughs that didn't rise correctly and doughs that just plain tasted bad. We've experimented with so many toppings and sauces as well. It has been an adventure, and I have to admit that it's allowed us to eat a lot of good if not sometimes really good pizza at home.
I have to tell you though - we are finally so close to getting this recipe exactly right! After getting a hold of Marc Vetri's "Mastering Pizza" book, it opened our minds to better understand how heat and moisture play a huge part in any home pizza making technique. We've adjusted our flour to yeast to water ratios accordingly, and it's producing some of the best pizza I've ever eaten in my life. 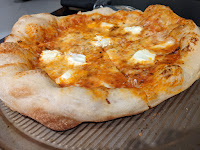 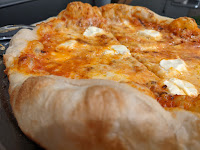 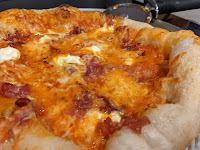 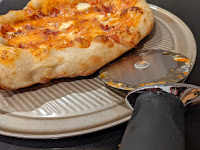 The areas where we have toppings could honestly not be better. We now make our own sauce and stick to simple ingredients. Prosciutto, mozzarella cheese and parmesan cheese are all we include any more. It's those last three bites at the end of each slice where you're just eating the crust that needs the last push from us. Don't get me wrong! The crust is very, very good. But it's missing something... Some pop of flavor that makes those last three bites just as delicious as the rest of the pie is what we need. 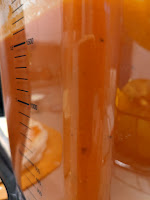 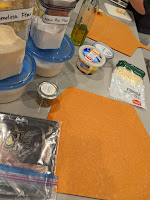 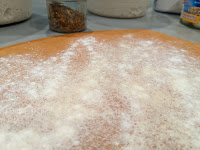 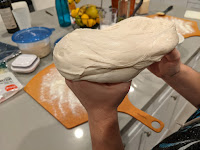 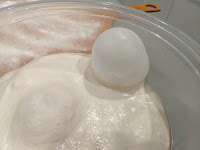 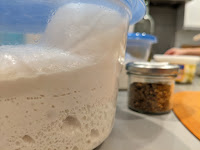 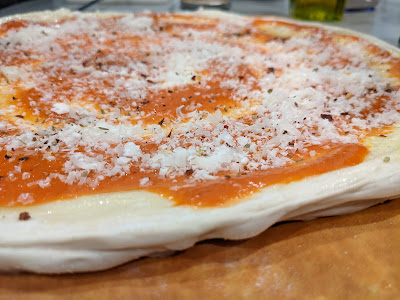 Experimenting will continue. Small improvements over time will hopefully get us to that perfect last three bites. I think we're going to see if a true sourdough starter would help when we do this next, to bring a bit of funk to the crust. Here's hoping that does the trick!
Posted by Rach at 11:51 AM No comments:

Throughout our 2+ year adventure of sheltering in place due to Covid-19, we've become very fond of puzzles. At Christmas, we were gifted this New Yorker bike shop puzzle, and we've been chipping away at it for a month now. A piece or two a day sometimes is all we were able to get to, but it was a perfect distraction from work when we needed to walk away from our desks for a break. 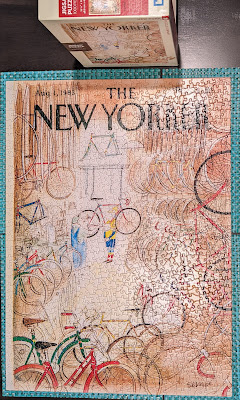 We bought a galaxy / milky way puzzle to do next, which looks like it might end up being even more difficult, but we're up for the challenge. I might need to invest in a small puzzle table so that we can get our dining table back though.  hahaha
Posted by Rach at 9:47 AM No comments:

For some reason, I've mentioned to several people recently how I pre-cook our weekly meals and prep us for a successful week ahead almost every single Sunday. I've been doing this for years, and it has surprised everyone that this is part of my regular routine! Here is how our perfect fridge looks on a Sunday evening: 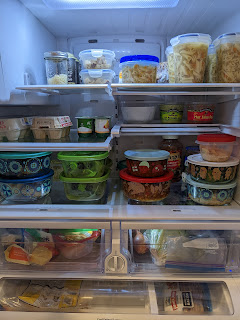 By Friday afternoon, it's basically empty!!
We also decided to create our own Fish Tacos this weekend, as we're exploring the entire local area for the best version in town. We think we may be near the top of the list now. These came out great! 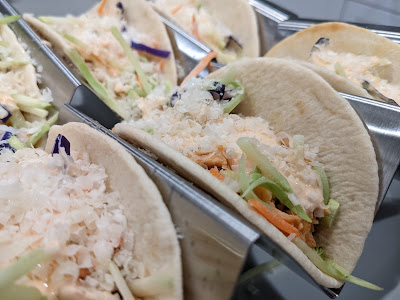 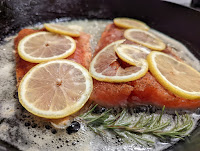 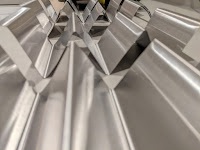 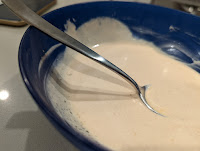 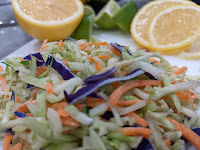 I am a big believer in all the ways that feng shui can enhance your life. I rearrange items around our house for luck, love and prosperity all the time and this past Saturday, it was time to usher in some new opportunities for my business... so I did a big front yard clean up session. Most importantly, I swept our front path completely clean and shook out the front door mat. Clearing the path for luck to come into our home straight through the front door was my goal. I even asked the universe to send me replies from two clients I've been waiting to hear back from for a while now. (Yes, verbally out loud while I was sweeping). 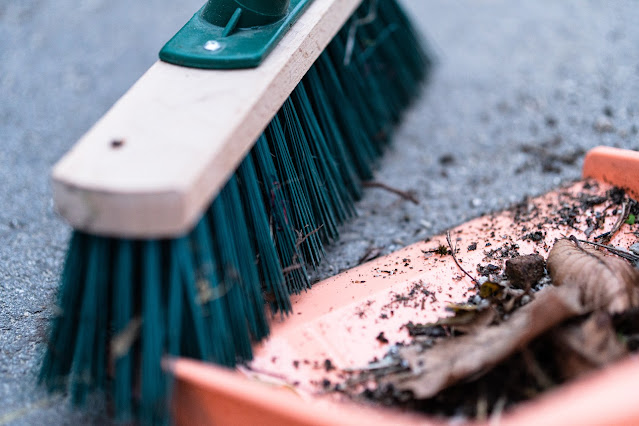 This morning, I was hoping to see a result from my efforts, and I absolutely did! It wasn't what I was specifically expecting (the universe is playful like that...), so I'll keep sending those requests out into the world for now. But I DID hear from the Association of Sewing & Design Professionals this morning. I applied last week to teach a course on "Armhole Fittings" at their October 2022 conference, and I am one of the finalists to be chosen! They've asked if I can add any more content to the schedule, so I sent over three more course ideas to them this morning. Crossing my fingers that the universe has brought me this amazing teaching opportunity for this year. I'm extremely excited!!!