Colorado Racing Season is finally here!  After months and months of some serious training in the cold, in the rain, and on the horrible indoor trainer, the hubby is racing at last!!!  His first weekend of racing proved to be quite a challenge, as we found ourselves outside the the cold, wet weather.  A road race followed by a crit the next day, the wind storms up by CSU ended up being a very demanding foe.  We even got snowed on during the last half of that Sunday's race!  The new bike also decided to throw a wrench into the weekend by coming loose in a few of its parts.  But the hubs still saw positive results, despite the problems that he faced.  He looks really strong compared to the Cat 3 competition, and now we just need to settle into a groove.

On Sunday, we headed up to CU campus for the third race of his season.  The sun was shining, and a ton of people were out to support the racers.  Almost as if on cue, the wind decided to pick up right in the middle of the Cat 3 race, and some ominous-looking clouds made their way toward us.  The rain held off, but the temperature dropped 10 degrees within a 20 minute span.  We saw yet another top 10 finish for the beginning of this Colorado racing experience, and I could tell by the look on his face that it could have been even better than that.  He looked smooth and comfortable on the bike on Sunday.  If he can just get in the right position on that last lap, he's going to take podium after podium this year.  I can feel it. 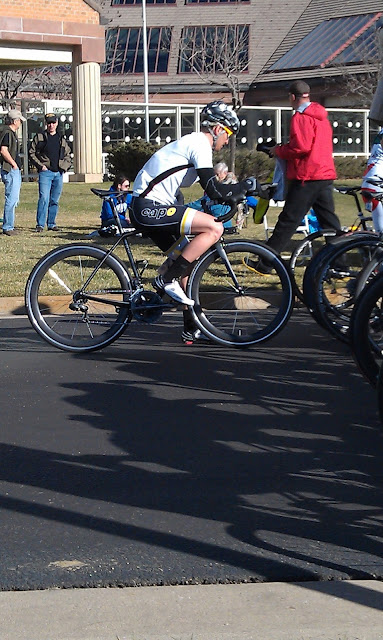