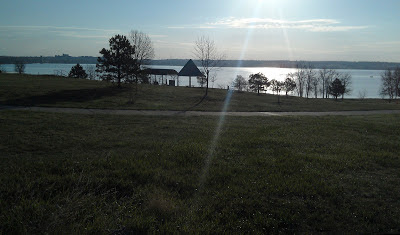 In preparation for my Sprint Triathlon in June, I decided that it would be a good idea to get out in a race to practice my transitions.  I signed up for the Barkin' Dog Duathlon, which took place on Saturday, May 11th. I was told that it was a chilly morning, but my nerves had me running warm!  We showed up a bit late, and I was one of the last people to get my bike into the transition area.  But thanks to a very nice woman who helped me, I was able to find a spot to set up. 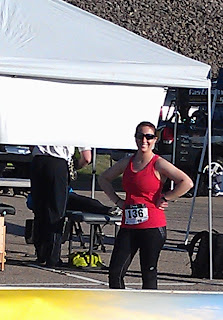 I was in the last starting wave of the morning, and we started our short run at 7:33am. 1.25 miles felt like a nice warm up, and then I jumped on the bike for an 11 mile loop. By time I got back to transition to the longer run, I was already 20 minutes ahead of my goal pace!! My legs felt so tired during that 5K, but I ran faster than any of my recent training runs, and finished 23 minutes ahead of my goal time of 1:45:00. Super proud of myself!! And my transitions could not have been better, for what I was hoping to accomplish.

Two weeks left until the Longmont Triathlon.  I'm nervous about the swim, for sure.  But at least I know that I can feel confident in the transition area now.
Posted by Rachel at 9:19 AM