When we moved to Colorado, I felt that it was important to get myself involved in the community's love for the outdoors. Not only would it help me to transition into the new culture easier, but it would also be a great way for me to shed those pounds that came with stress and discontentment in Ohio and Texas. So I set a lofty goal: I wanted to finish a Sprint Triathlon in June of 2013. I would have nine months to train for the event, and that should help me reach both goals easily!

Originally, I was looking at the Boulder IronMan Sprint Trathlon. But after I started my training, I just was not feeling confident in swimming 750 meters in open water. I didn't want to quit though, so instead I did some research and found the 33rd Annual Longmont Triathlon on June 2nd. Instead of an open water swim, we would be in a pool, and it would only be 525 yards. This seemed much more manageable, and on the morning of the event, I found that I was not the only one nervous about the first leg! I was lucky enough to start in the second wave of participants, so I was able to watch the first wave slowly make their way through the laps. It helped give me a little confidence, and I would say that it was a big success for me. I finished in 1:39:33, which was better than my goal of 1:45:00!
It's been a week and a half since the race, and I still don't know if it's set in that I reached such a big goal. I'm really proud of myself, but I need to keep pushing. I signed up for a half marathon in September, so the next four months will provide a new challenge, and should keep me moving.

I'd like to say that my first triathlon won't be my last. But I do think that it will be the only one in 2013. It took a great deal of training, and this was just for a Sprint! I found it challenging to keep up with the pool workouts especially, so I might be leaning more toward the duathlon / long distance running scene. But who knows! Maybe 2014 will make me change my mind about that... 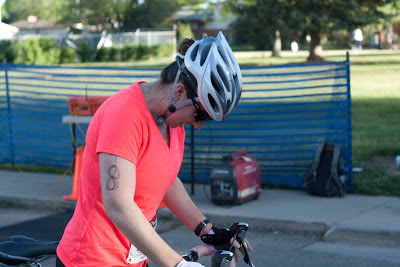