In lieu of a beach vacation this year, the hubs and I decided to venture out to New York City for a week. With all of the Christmas decorations up in the city, I knew it was going to be a great time to visit and show him my old stomping grounds for the first time. With the weather being so mild on the east coast right now, it proved to be even better than I was anticipating, and we had an amazing time!

Upon arriving at LGA, we grabbed an Uber to take us into the city. We stayed pretty close to Times Square at a place called Cassa Hotel on Ninth Avenue. The room was great, and it was a major bonus that I was able to find us a king sized bed in that part of the city. It looked like our room had been recently renovated, and everything was clean and quite trendy. Despite the fact that it took us over an hour to get to the hotel in NYC rush hour traffic, we were glad to have arrived to a place that beat our expectations. I would definitely recommend the spot to anybody.

After we settled in for a bit, we got dressed up and headed toward Rockefeller Center. It has been over a decade since I'd been in the city, and I was excited to see the tree all lit up, along with all of the other amazing sights to see in that area. It did not disappoint. It was very crowded all around, but I started to feel like Christmas was finally upon us. We took some pictures, and then headed off to catch our reservation at The Monkey Bar for dinner. 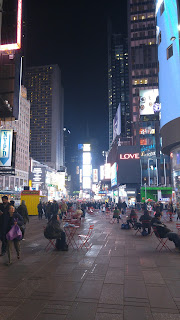 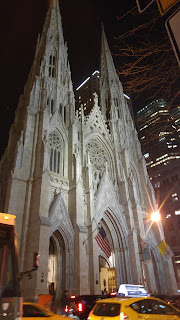 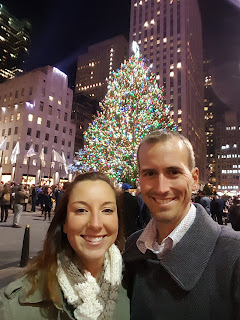 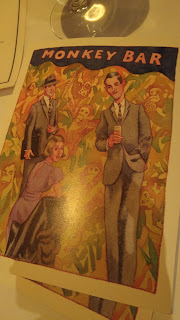 The Monkey Bar was touted online as one of those "must-see" New York city restaurants. It's been around since the repeal of Prohibition, and has been renovated a couple of times to keep it cool and relevant. The atmosphere inside was very busy with groups talking and lots of people enjoying meals and drinks at the bar. It was clearly a good place to be. The food was amazing. We started with a tuna tartare, which was a first-time try for both of us. Delicious. As we moved on to dinner, I ate the night's special: Lobster Risotto, and hubby had the Fettuccini Carbonara. Both were out of this world. Unfortunately, the service was pretty poor. It seemed that, unless you were a "regular" at the restaurant, you weren't really worth their time. Sad really, because it kind of ruined an amazing experience.

Stuffed full of great food, we then walked our way back to the hotel for a good night's sleep...
Posted by Rach at 2:29 PM