We spent our New Year's Eve out at Luke's Steak Place in Arvada. It was a close drive, and the food was just what we were looking for to close out the year. The restaurant wasn't as fancy as some of the previous places we'd been, but I really liked the atmosphere and more casual feel. You could tell that the place was family-run, and they just wanted to take care of you well. I really enjoyed it. 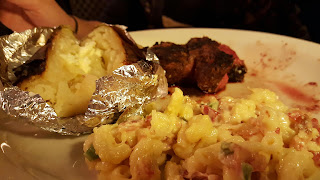 In traditional form, we also took our annual "dress-up" photo before going out. Since it's one of the only times we actually get out the dress clothes each year, I feel that it warrants a nice photo.

This year, I wasn't going to make a resolution. I was going to keep the good old "lose weight and keep it off for once" resolution to myself (mostly because it's a resolution that I struggle to keep each and every year. So sharing it with everyone was just going to be embarrassing). But it has recently occurred to me that I can make an even better resolution...

This will be the third attempt I'll make at moving toward going vegan. The first time I tried, I was successful for a while! But the cravings eventually overpowered my will, and it was hard to sustain while the hubby continued to eat cheese and meat and eggs every day. The second time, I didn't last even a week. I wasn't committed to it, and I failed fast.

For 2016, my goal is to move slowly toward this goal. For starters, we are going to cook one meal a week that will substitute any animal products with a vegan substitute. Throughout the week, the goal will be to eat healthy, and be conscious of eating animal products, but not to limit ourselves just yet. My ideal goal here is to flip the script. So by the end of the year, I'd like for us to be eating only one meal a week that includes animal product. Otherwise, all plant based foods will hopefully be the norm... We'll see how it goes. Being from the mid-west, growing up on meat and cheese at every meal, it will be difficult to step outside that box. But we tried a cashew vegan "cheese" substitute today as a snack, and we were pleasantly surprised at how good it was! So hopefully we can just continue to find great alternatives all year long. Ultimately, I just want to continue reducing my carbon footprint more and more. I just feel that if I'm not doing everything I can, then how can I feel good about passing on the state of this planet to my nieces and nephews? I at least owe them the effort, so wish us luck!!
Posted by Rach at 4:46 PM