Ok, so I understand that we're on the path to learn about vegan foods, but I grew up in the mid-west. My grandparents owned cows for the slaughter, and my parents had a freezer full of different cuts of beef in our basement. I probably ate amazing beef at least once a week as I was growing up, and although this isn't an excuse, I really do still have cravings for the stuff.

For Christmas this year, we were gifted a brand new cast iron skillet, but hadn't used it yet. So a couple weekends ago, I decided to break out the new toy and cook bacon wrapped filets, lobster tails and perfect baked potatoes. We felt like we were spoiling ourselves a little bit, but the meal was amazing and I was fairly stunned by the caliber of food we could come up with at home!

I also tried to create a bernaise sauce from scratch, but was unsuccessful. It ended up being more like a tarragon seasoned melted butter, but it still tasted great and put that cherry on top of the meal. 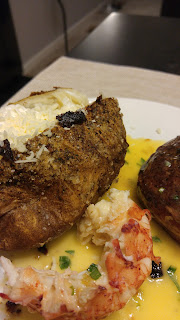 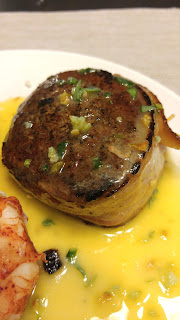 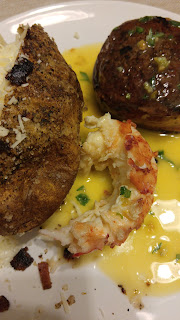