This year, I shared my first multi-sport race day with the hubs and it proved to be a lot of fun! We spent a good 30 minutes the night before, creating "bike origami" to get two bikes and four wheels into the back of our little coupe. Miraculously, it somehow worked out great and we got everything into the car without too much swearing or yelling. ha

The rituals of the night-before meal and the SUPER early pre-race breakfast brought back a lot of fun memories from the past few years. I was excited to get out there for the race, and those butterflies that always seem to show up during the drive to the race somehow stayed away...  I must be starting to feel some more confidence for the shorter courses. We'll see if that translates into my longer races too, but I'm guessing they'll find their way back when I see that open water in front of me.

Our morning forecast was pretty cold for a Saturday in the middle of May. It was only 40 degrees outside at the start of our race, and we were as bundled up as we felt we could be. Hubby went off at 7:05 and I followed, ten minutes later.

Unfortunately, I don't have any pictures of myself at this race this year. We were so excited to take pics of hubby after he WON his age group!! So here are a few of him accepting his pint glass and gift card award. He did awesome! 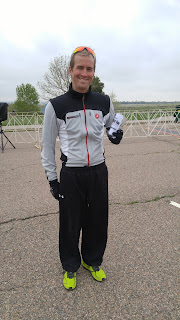 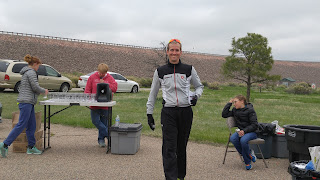 I showed up at the finish line 40 minutes after he did, but I'd put in some really good times compared to my race goals. I set a PR 5k during my first run and averaged 17mph on the bike. I have some work to do to get that third leg looking just as good as the first two... But I'll get there! Only 8 weeks left until Muncie!!!
Posted by Rach at 7:50 AM