To Indiana and Back


The drive to Muncie, Indiana was about seventeen hours in the car, so we decided to make it a two day trip, each way. After packing the car with my bike and all our other essentials for race day and for the trip, we set out for Kansas City on Wednesday, July 6th. We were blessed with great weather that first day, but not much scenery to help us pass the time.

Luckily, we had a destination to look forward to that first day, as we were having dinner with my aunt and uncle who live in the area. We met up at Blind Box BBQ, and had the chance to catch up after a few years of not seeing each other (way too long!). It was a blast, and we had so much fun talking, I barely had time to browse the menu before we had to order! We followed it up with a discount stay at Harrah's North Kansas City, which provided some interesting people watching, to say the least.

Day two was tough. The scenery was better, but I was getting anxious to arrive in Muncie, and was itching to get out of the car.  We made it to the hotel in the early evening, and I was more than ready to go find some good food to eat. We were lucky that not far away, Ball State campus was housing some real gems. We found a brewpub called Scotty's that proved to be so good, we went there two nights in a row!  haha

The drive home was horrible, I'm not going to lie. Getting back in the car to do another two long days was difficult. Stiff legs after my race didn't help, either. But we tried to stop a few more "tourist-y" places, to check out new cities and landmarks. We even took some pics at the St. Louis arch near the end of day one. 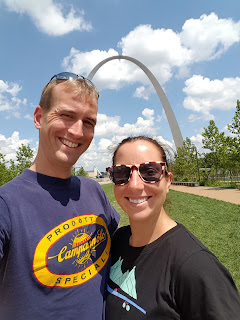 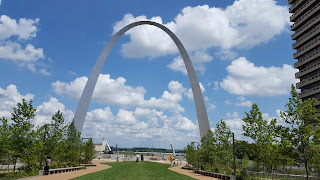 If and when we decide to travel for the next big race (for either of us), we might do it a little differently... Airplanes do carry bicycles in the cargo hold, after all. Maybe that would be worth trying!
Posted by Rach at 9:32 PM