This weekend's recipe was delightfully simple to make, in comparison to some others we've had. The recipe I found online required that a Yellow Curry Paste be made a day prior to the actual cooking, so the most time consuming part of the dish was actually all done a day ahead. We're definitely learning that Chicken Thighs are better than Breasts when simmering and stewing the meat, so we'll try that next time. And I couldn't find Coconut Cream at the store, so I went with good old Coconut Milk. Still came out tasting great, but I bet that Cream would have really made it amazing. On a mission to find that somewhere in this city before the next time we do this. 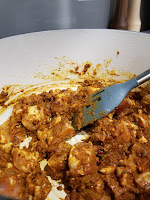 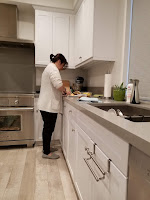 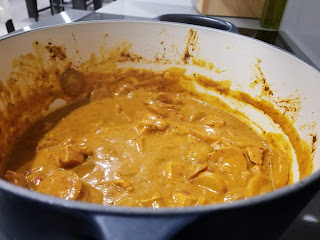 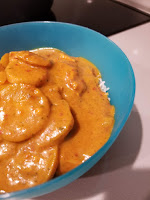 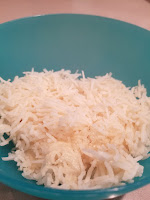 This week was a good one. Not sure what we did that was too different from last week, other than making sure we definitely stopped the proofing process at the exact right time. Still not convinced the 20 minutes we were late last week caused the issue, but I don't know what else it could have been.

We have the texture and color down at this point. Still just searching for that very sour tang... A continued work in progress.

I refused to do this again this weekend. I'm frustrated that it's not as easy as I think it should be (I know that's stupid, but so be it...) Plus, I spent a good portion of the weekend at my work computer, trying to catch up in a single weekend a year's worth of ignored responsibilities by a team member who just left our group. I didn't really have the time to make three rounds of Hollandaise Sauce again. Maybe I'll try again next week. Or maybe I'll find a good brunch place near-by.
Posted by Rach at 6:42 PM No comments:


Eggs Benedict turned out better this week, but still not great. Last week I over-cooked everything, so naturally, I under-cooked everything this week. Poached eggs were too runny (2 minutes is also not better than 3), and the Hollandaise came out too runny. I'm sure I was afraid of over-cooking the egg yolks again and pulled them off too soon. 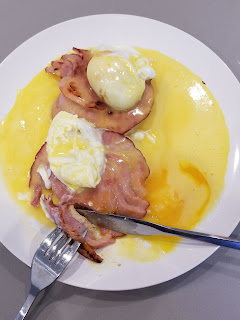 Sourdough loaf this week took an interesting turn. After a couple weeks of amazing Sourdough flavor, we're edging back toward the good old White Bread loaf we started out with a couple months ago. Trying to think about how we can keep the starter as sour as we want it while keeping up with feedings as it needs. Tricky balance that we still have yet to even begin figuring out.

For our first attempt at Gnocchi, I turned to my new obsession, Nancy Silverton. In her Mozza Cookbook, she has a Gnocchi with Duck Ragu recipe that we decided to try. Unfortunately, the meat in our grocery store is not exactly the greatest, and unless we wanted to buy a whole frozen duck (that felt harder than a rock this morning in the grocery store freezer), then we needed to find an alternative. So we bought Lamb instead.

The meal turned out amazing. The gnocchi was actually gnocchi for the first time, instead of turning into mashed potatoes at the last minute. I would attribute some of that to the straining technique we used this time vs. what we've done in past attempts. When we used a colander in the sink to drain the water, the gnocchi seemed to always condense and mush together into a fancy version of mashed potatoes. Using the wire strainer to pull the gnocchi out of the water prevented that from happening this time, and made a huge difference. The size of the gnocchi turned out a little large. I think they're supposed to be smaller... But otherwise, they were fantastic! (Thank you, Nancy!!) 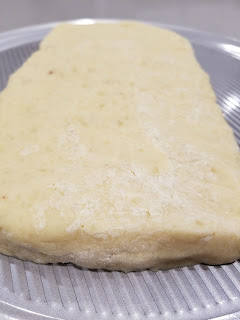 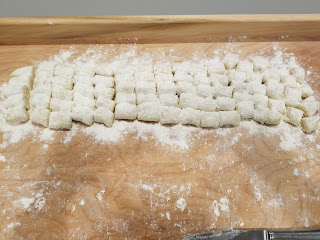 The sauce was very good. The Lamb was a good substitute for the Duck, although we'd like to try and actually find Duck Legs one of the next times we try this. And the idea of maybe adding a little heat was intriguing. We keep hearing about Calabrian chili sauce. Maybe that would be good here? We'd also be interested in trying a Brown Butter sauce instead, or something maybe a little less acidic.  Overall though, an amazing start to this cooking challenge! 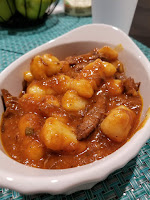 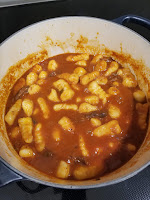 I have made one perfect Eggs Benedict in my life. A beautiful Hollandaise Sauce with flawlessly Poached Eggs. I kind of thought I had it down.

Today, I was rudely reminded that the Eggs Benedict I refer to above was made more than a year ago. The version I made this morning was a sorry excuse for the dish, and if served at a restaurant, would have been thrown back in the chef's face. I attempted my first round of Hollandaise as a single serving, cutting down the recipe I had to a single egg yolk and all other ingredients at the same ratio. It was going alright until I poured in too much Worcestershire Sauce and walked away for 10 seconds too long, totally scrambling the egg. I thought I could salvage it, but the sauce turned out runny and gross. In the trash it went. 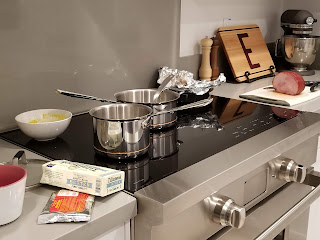 I quickly rebounded to made a second attempt at the sauce, this time babysitting it like I knew I was supposed to. I got the sauce to a good consistency, but the butter I'd rationed out hadn't all been used up yet. So instead of being smart and just stopping where it looked good, I tried to get all the butter in there. And of course, it also looked way to runny now. So I threw in another egg yolk. Bad idea. The sauce thickened a little more, but it was not right. I still ate it though.

My eggs were poached well (a little over done - 3 minutes is better than 4), and the ham was delicious. English Muffin was under toasted though, and now I have two rounds of sauce dishes to worry about cleaning for the rest of my morning. I look forward to hopefully doing better next week.

Something went slightly awry with the bread loaf this week. When we made the dough, I forgot to stir the starter before using it, and I think that was the major issue. We didn't get the same rise out of it during the proofing processes, and it ended up baking very oddly... the center rose almost too well, while the exterior "skin" barely grew at all. We ended up with an almost rose-like shape this week which feels very dense and heavy. We also unfortunately found an undercooked portion in the center of the bread. The taste, however, is just as good as last time. So we will be happy to still enjoy it very much this week! 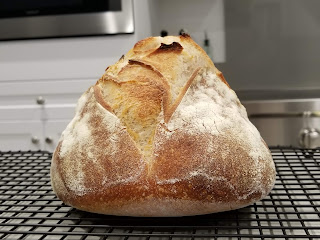 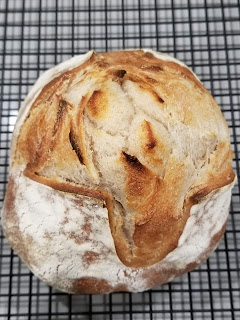 We needed a base to start out with for Jambalaya, because I didn't have a saved recipe from any time we may have cooked it before! So we started with Emeril's Jambalaya recipe that we found on the food network's recipe website. It was a really good start, but we've already taken a few notes for next time: more salt, less rice (it made SO MUCH), less cook time for the shrimp, more paprika for the color, and chicken and sausage are always so much better when they're hard seared first. So we'll try all of that next time. Notes are taken, recipe is revised and we're ready for the week ahead. 5 day countdown to the next adventure! 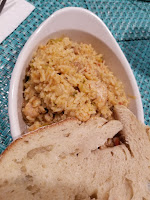 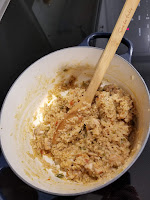 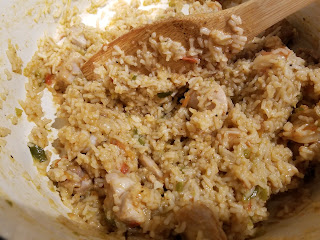 
Now that we're settled into our new house with a gorgeous kitchen, calling my name every weekend, we've decided to use this year as a time to master some of our favorite dishes. All of them are challenging in some way, requiring some practice and time to master. Some require lots of technique while others need help getting the spice level and taste just right.

We figured out of 52 weeks, there will likely be at least 4 that require us to travel somewhere for something. So we figured 48 weeks of cooking: 8 different meals, cooking them 6 times this year to see if we can get them to a point of "easy."

We figure that each of these lend themselves to lots of learning. And if we start getting flavors right in the first few tries, there are other challenges we can throw ourselves into. Jambalaya might get us into our own sausage making, and Spaghetti Carbonara might allow us to learn how to make a great home-made noodle. But first, we need to master the sauces and flavors.

Today or tomorrow, we will start with some Jambalaya. I'm going straight to the obvious choice and we're going to make Emeril's Cajun Jambalaya recipe this first time around. I figure we can't get a better start than with the king of Cajun food, right? From there, we'll take some notes on what we liked, didn't like, and what to do different next time.

We'll also keep up with the Sourdough, especially now that our Starter is so much better. And I also have a personal goal to master the perfect Eggs Benedict (Hollandaise Sauce and a Poached Egg to perfection still evade me). But since the hubs won't eat that meal, I just need to maybe start my own little tradition.

So Happy New Year to all of you - here's hoping that you are just as excited about your 2019 Resolutions as we are about ours.  <3
Posted by Rach at 10:18 AM No comments: