Playing in the Dirt


We've been in our new house now for 9 months, and the Coastal Spring weather is calling me outside every chance that I can get. So we've slowly been taking on the outdoor spaces, trying to make them feel like home, feel like ours, and look nice. It's been super frustrating that the builders who finished our home didn't take any care in dealing with the landscaping or finishing touches on the house, so a lot of it needs to be re-done. I've been tackling the gardening a little at a time each weekend for the last month or so, and it's starting to come along.

I started with a few new plants that felt more like "me," and they've already been growing and flowering. When I get home from work in the evenings, the sun is still nice and warm out in the yard, and it's a calming task to go out and water the plants. What I should have done though was to clean up the plants that were ugly, overgrown and misplaced all around the yard in the first place. So that's what I did today. I pulled up 7 giant bushes that looked more like weeds than anything else, and it's finally making the area look less like an overgrown mess.

The issue now is that those weedy-looking bushes took up a lot of space, so now the beds look oddly placed and sparse. So that will be my project next weekend. Once all of that looks good, I have 10 giant bags of mulch sitting in the garage, ready to go. It should come together soon.  <3 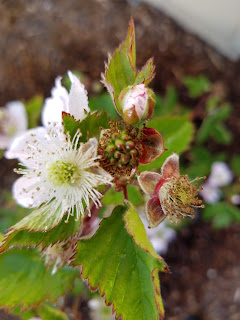 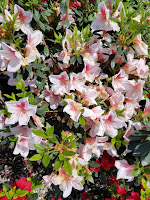 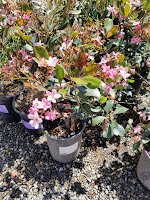 Mole in the Slow Cooker


This time, instead of boiling the chicken thighs and simmering the Mole Sauce on the stove, I decided to make the Mole and then put it in the slow cooker to go all day. I really preferred this cooking method as it was so much easier. I feel like the sauce also got deeper and richer, and the chicken had better flavor it in by letting them cook together all day.

I unfortunately made the same mistake this time with the Mole Sauce as I did last time... I forgot to strain it before I put it in the Slow Cooker with the chicken, so it came out grainy again. Last time we did this, we went out to the store and found a really nice, high quality strainer for just this purpose, and I somehow still forgot to do this step. Will definitely have to remember to do it next time.


The second time we did Carbonara this year felt like it was going to be perfect! I was getting the egg to cheese ratio right. The amount of pasta water on the noodles was creating the right consistency, and the bacon was nice and crispy. I'd used some local Parmesean with great flavor, and I was sure the only thing missing was a true Guanciale instead of bacon.

It turns out that we learned a huge lesson though with this dish. We over-salted our pasta water. The hubs and I watch enough TV cooking shows to hear over and over again that the "pasta water should taste like the sea." So we went all in. That pasta water was super salty, just the way we thought it should be... and the dish turned out to be so salty that it was almost inedible.  :(

So a few things to remember here:


On top of that, I am at my wit's end trying to find Guanciale here in the Bay Area of California. I kind of can't believe it. The little hipster place that's located near our favorite brewery is probably sick of seeing us pop in every other week, asking if theirs is ready to sell yet... Although I honestly blame them for telling me each time I go in there that, "It will be ready in another two weeks." Seriously, they've been telling me that for the last four months.

I only know of one place that is guaranteed to have Guanciale, and it means a drive all the way back up to Los Altos. It was a three minute walk away from our last apartment, and I apparently took that WAY for granted. Coming up with a reason to drive all the way up there is not easy. The traffic is horrible, and there are definite reasons why we left Los Altos... but it seems I'm going to need to suck it up and just do it.
Posted by Rach at 8:26 AM No comments: